By absolute accident,  I went to the Reagan library on the centennial of his birth, 5/15/11. It’s a triumph of propaganda, Hollywood and the best P 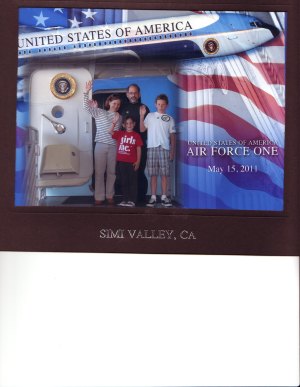 R talent money can buy. I highly recommend it to any student of the power of narrative. I cannot even begin to describe the professionalism of the video  and interactive display there — and it’s almost all video or interactive display — and the ability of people focused on a mission to distory or ignore factual reality. The most interesting facet of that factless reality: By this account, George H.W. Bush never existed, and Iran Contra consisted entirely of Ronald Reagan’s last, self-serving “mistakes were made” explanation of it. I’ll write more on this place, because it’s fascinating, not least because of its mountaintop location. But right now, I thought I just show what it will look like when I’m president and in the door of Air Force One. Coming in, what, 2016 or so.